In the final project of a physical prototyping course. Me and four other students were tasked to come up with an IoT concept with amusement parks as our target group where owners were our customers and visitors our end users.

Our final goal with Dexter was to create an IoT product that would benifit the parks economy by finding more efficient ways of using their resources.

We wanted to cut costs and at the same time enhance visitors user experience. With the help of Dexter, park owners and staff would be better aware of the visitors user journeys. It would help the park in decision making and it would help them to use their staff in the most efficient way by developing patterns over time. This would be achieved by collecting ream time data from visitors throughout their user journey.

By collecting certain data, park staff would know where they were most needed. By targeting bad user experiences before they actually happen, the park would be able to turn a bad user journey around before it even took place – pro-active actions.

By analyzing the data collected over time, it could help park owners to make big and small business decisions in regards of what restaurants, shops, rides to keep and which ones to replace or move, etc.

For collecting data about user satisfaction, we needed a number of sensors and our research implied that the wrist was a good placement on the human body for these sensors – pulse, body heat and galvanic skin response.

We decided to design a smartband for the wrist that could contain the sensors we needed without being too intrusive for the wearer. Benchmarking showed us that Disney was having a similar product specially for their amusement park.

We didn’t feel that simply collecting data that would help the park both in real time and over time just wasn’t enough. So in order to give something to our actual end users, we needed to find a way to enchance their experience in the park.

So, the band also replaces physical tickets for smoother carousel rides. Visitors can pay in restaurants and shops with it. It replaces the restaurants old buzzer systems and instead the band tells the guest directly when the order is ready to pick up. It can work as a key for the amusement park resort for the over night visitors. Every visitors would were a personally bound band, so finding a lost child or other family member would no longer be a hazzle with the help of the gps.

We made a 3d model of a prototype of the bracelet. A rough version of what it could look like it. Later we made a 3D-printed mould which we filled with melted rubber. This created a realistic wristband where we mounted our sensors for testing.

The sensors were hooked up to an Arduino board and then we used Plotly to visualize the data that it collected from a wearer.

We also created a mockup of what Dexter system could look like for park owners. A map where they could see real time data to determine where staff was needed the most and in what parts of the park that visitors felt happy or unhappy. A text feed could inform staff of where they were needed etc. 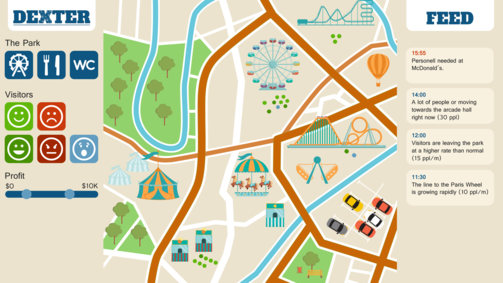 While we are aware that Dexter probobly won’t be a reality today, we know that it can be tomorrow. Tracking people and data collecting is happening all around us and many times we’re not aware of it.

A product like this will scare some people. Not everyone is comfortable with the privacy intrusion that takes place. But we have seen the movement for years and it’s not going away any time soon. Home electronics are listening to us and watching us 24/7.

We believe in transparency and Dexter would be very open about the data collected. And we believe that the benifits for both park owners as well as visitors would overcome most  privacy issues. It’s designed for a future we where data collection is conducted openly and secure.